With Wildcat, Collins, Sugarloaf and Sunnyside lifts already spinning, it's starting to look like the mid-winter Alta that we all love.

On Sunday, December 2nd, Alta Ski Area surpassed 100" of snowfall for the season. With Wildcat, Collins, Sugarloaf and Sunnyside lifts already spinning, and Supreme not far off, it's starting to look like the mid-winter Alta that we all love.

What a start to the 2018-19 season it has been. After a dry and unpromising first half of November, the snow gods woke up from their summer naps and delivered one of the snowiest starts to the season in the past 15 years.

On November 22nd, Alta sat with a solid base 20” base of natural and manmade snow. Cold temperatures had allowed for some great snowmaking conditions, but the forecast was looking bleak. Weather nerds were freaking out, snow forecasters were grasping at straws, and the superstitious skiers were inventing new pray-for-snow rituals.

With 63” of new snow in the two weeks since Alta opened, Alta Ski Patrol has managed to open Wildcat, Collins, Sunnyside and Sugarloaf chairs. Supreme, Albion and Snowpine are not far off. Alta Ski Patrol has been working around the clock to get as much terrain open as possible. Ballroom, Fred’s Trees and even the High T are now open for the season, with more terrain opening with each passing day.

In the words of Ron Burgundy, “that escalated quickly.” 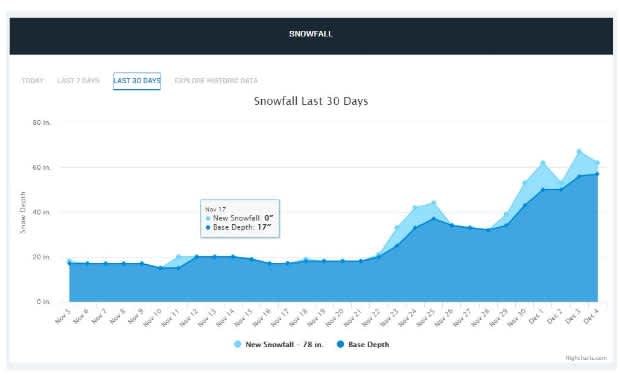 Alta has seen 113” of snow this season, making the 2018-19 season into the third snowiest starts to the season in the past 15 years.

The opening of Sunnyside and the Albion base area has thinned out crowds while giving skiers access to some of the best beginner and intermediate terrain on the mountain. The Alf Engen Ski School is now offering a full slate of lessons and classes.

The local’s favorite Ski @ 3 program is good to go with the opening of Sunnyside. For just $12 per day or $39 for a full season, skiers can ride the Sunnyside lift from 3-4:30pm every day of the season. It’s the ideal program for new skiers looking to get out on the hill.

The forecast is currently calling for a period of high pressure and sunshine, but the snow is projected to return around mid-month, just in time for the holiday season. With 113” of snow and a 50” inch base already, this would be an ideal time to book that holiday vacation. While Alta Ski Alta doesn’t own their own lodging, there are plenty of lodges, condos, chalets and private homes for rent in Little Cottonwood. For a full list of lodging offerings check out Alta Lodging.

It's been a great start to the 2018-19 season and if fancy graphs and numbers aren't your thing, check out some photos from the first two weeks of the season. 100 inches and counting is an understatement.