your guide to the magical world of alta's wildflowers. 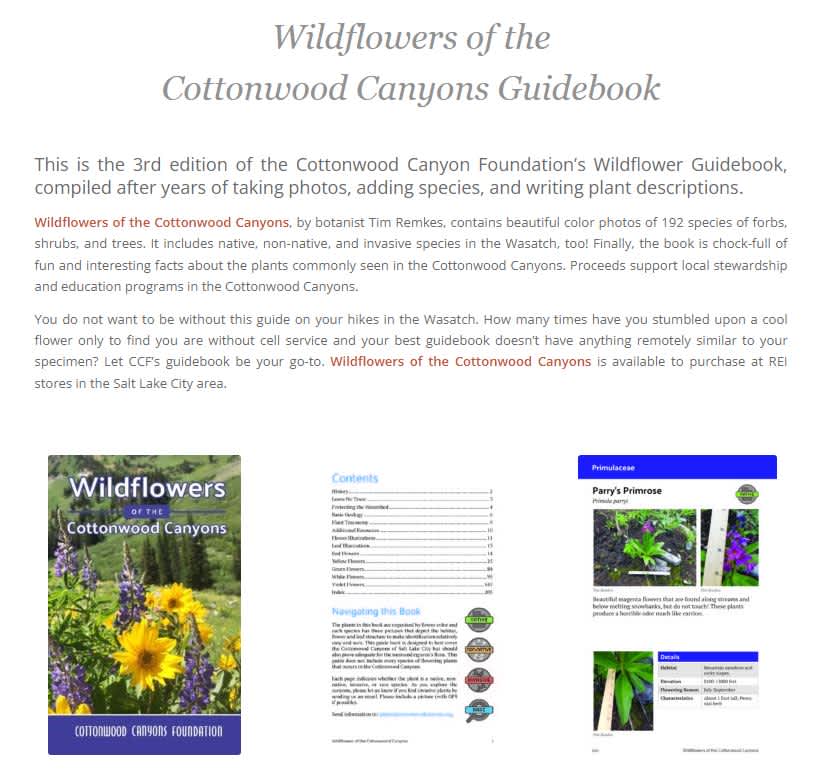 Wildflowers have been celebrated for time immemorial and there is no exception in the Wasatch. Listed below is a small selection of the wildflowers waiting for you in the Albion Basin and beyond!

The common plant names link to descriptions from the Wildflower.org database. The photos are from Alta photographer Rocko Menzyk. We have also included plant descriptions borrowed from the Alta Environmental Center, Lexi Dowdall of Ski Utah and Tim Remkes of the Cottonwood Canyons Foundation.

But first, some rules from the Alta Environmental Center on how to responsibly enjoy the wildflowers.

A few different paintbrush species can be found within Alta with a wide range of paintbrush colors, ranging from red, to pink, to orange, to almost white. One of the most common paintbrush species within Alta is the Wyoming paintbrush, which is most often scarlet or red-orange in color. Linear leaves subtend the torch-like spikes of showy, bright-red bracts. These bracts are hiding small, green flower tubes. - Alta Environmental Center

One can distinguish this species from Showy Goldeneye by counting the number of flowerheads per stem: true to its name, Single-Head Sunflower has only one flower per stem, while Showy Goldeneye has up to five flowers per stem. Also known as Oneflower Helianthella and Little Sunflower. - Cottonwood Canyons Foundation

"Almost every person, from childhood, has been touched by the untamed beauty of wildflowers."

This plant earns the name "everlasting" because its stark white bracts persist after the flower has dried up. - Cottonwoods Canyon Foundation

The name "Fireweed" comes from its swift ability to colonize areas following a fire. It was one of the first plants to re-establish after Mount Saint Helens erupted, turning the barren landscape into fields of pink. - Cottonwood Canyons Foundation

Lupines, though poisonous, are beneficial nitrogen-fixers, meaning they take nitrogen from the atmosphere and deposit it into the soil. - Cottonwood Canyons Foundation

This species has a showy flowerhead that lends credence to its species name "specious," which means good-looking, handsome, or beautiful in Latin. - Cottonwoods Canyon Foundation

"Flowers are a proud assertion that a ray of beauty outvalues all the utilities of the world."

The name, viscosissimum, comes from the sticky hairs that cover the plant. The petals are pink with distinctive stripes. The stripes are thought to have evolved as "landing strips" to guide pollinators. - Cottonwood Canyons Foundation

Geraniums, or Crane's Bill, are named for their curved seed pods that resemble the beak of a crane. This particular species is named after Sir John Richardson (1787–1865), an arctic explorer and naturalist. - Cottonwood Canyons Foundation

Delicate, magenta pink or purple flowers distinctly resemble the shape of an elephant’s face and trunk. Stems are singular though often clustered together, varying in height. Leaves resemble those of a fern with teeth. The Elephant-Head blooms late June through early August. You'll find this specimen growing in wet, boggy areas, around beaver ponds, meadows, or along streams and lake shores. This unique flower occurs at higher elevations from 7,400 feet to above timberline. The name Pendicularis derives from the Latin word for louse. There was an old superstition that eating these plants increased lice on cattle. - Ski Utah

"One person's weed is another person's wildflower."

This is one of the largest species of Penstemon. Its showy inflorescences make it a commercial landscaping species. Also known as Wasatch Beardtongue. - Cottonwood Canyons Foundation

Look for this fetching and delicate bloom in cool, damp areas in July and early August. Blooms can vary from white, blue, to coral red, and yellow as their color is determined by the acidity of the soil. Pale blue or yellow hues indicate a basic PH while darker colors indicate more acidic soils. The bloom is suspended above the fern-like foliage below. Look for 5 wing-shaped sepals and 5 tube-shaped petals. Butterflies and hummingbirds are often found near these flowers. Look for them in open woods and valleys as well as moist alpine and subalpine meadows. - Ski Utah

The white flowers and height of this species make it very distinctive among other members of this genre. - Cottonwoods Canyon Foundation

This is the largest member of the Carrot Family that is native to North America. - Cottonwoods Canyon Foundation